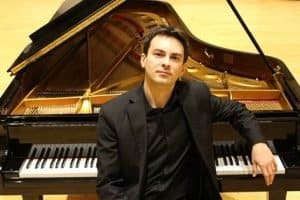 DURANT, Okla. – Pianist Catalin Dima will present a recital of the 24 Preludes of Frederic Chopin and Maurice Ravel’s Gaspard de la nuit on Wednesday, February 6, on the campus of Southeastern Oklahoma State University. The concert will begin at 7:30 p.m. in the Hallie McKinney Ballroom due to renovations in the Fine Arts Building.

There is no admission for the concert.

Dima, a newly appointed Southeastern faculty member, is a prize-winner in many national and international competitions, and has performed numerous solo recitals and concerts in the United States, Romania, France, Austria, Germany, Switzerland, and Malawi. Among most recent concerts, Dima has performed at the Cosmos Club in D.C. as a guest artist invited by the Embassy of Romania and at Weill Recital Hall at Carnegie Hall.

He also played six concerts with violinist Alexandru Malaimare in which  they promoted Romanian music in Virginia, Illinois, and Indiana. Dima and Malaimare will perform a recital on the Southeastern campus in Spring 2019.

This concert is the first piano performance of the 45th season of the Musical Arts Series sponsored by the Ruth Steger Piano Institute and the Clark & Wanda Bass Foundation Lectureship. For more information about Musical Arts Series events, contact Dr. Jeremy Blackwood at jblackwood@se.eduor 580.745.2088.