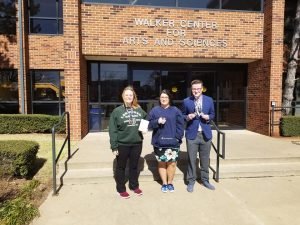 Dr. Randy Clark, associate professor of communication studies and speech and debate advisor, said, “I’m very proud of the team and their showing.  Our freshman gained a remarkable amount of experience this weekend and a tremendous amount of respect from other competitors and other coaches from the more established programs. ‘’

The Parli debate team of Morrison and Nunley reached the semifinal round, losing to the eventual champion team from Oklahoma City University.

SSDA’s final competitive tournament of the season will be the Pi Kappa Delta National Comprehensive Tournament, March 20-24, at Hofstra University in Hempstead, NY.

To learn more about Southeastern’s intercollegiate forensics program and the SSDA tournament schedule, visit the Department of Art, Communication and Theatre website http://homepages.se.edu/comm or contact Dr. Clark at frclark@se.edu or extension 2556.