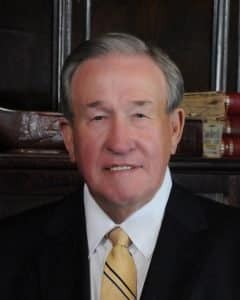 From the Oklahoma State Regents
for Higher Education

State Regent John Massey was recognized as a state regent emeritus during the April 24 meeting of the Oklahoma State Regents for Higher Education.

Massey will complete his third nine-year term on the board in May, making him
the first consecutive three-term State Regent in Oklahoma history, with 27
years of service.

“Regent Massey is known for his tireless dedication to student success and
community engagement,” said State Regents’ chair Jay Helm. “His contributions
have advanced the work of the State Regents and our colleges and universities
at every level. We congratulate and sincerely thank him for his many years of
exceptional service to Oklahoma public higher education.”

“When Regent Massey speaks to students, business leaders and state policy
leaders, he always stresses the importance of higher education. He has been a
champion for the GEAR UP program, the Oklahoma’s Promise scholarship and degree completion initiatives throughout his service as a state regent,” said
Chancellor Glen D. Johnson. “His commitment to quality and access in higher
education has made him an invaluable member of the State Regents for nearly
three decades. He will be deeply missed.”

Massey is chairman of the board of First United Bank and Trust, headquartered
in Durant. He is also chairman of Durant Enterprises Inc., and serves on
the board of directors of the Oklahoma Foundation for Excellence.

Massey earned a Bachelor of Science degree from Southeastern Oklahoma State
University, where he served as student body president. He is the only student
in the history of Southeastern to receive the Outstanding Student Award for
three consecutive years. In 1984, he received the Distinguished Alumnus Award
from the university.

He served in the U.S. Army from 1954-57 and was a member of the National Guard from 1953-54 and 1957-61. During his service, he was nominated by his fellow soldiers at Fort Carson, Colorado Springs, Colo. and Camp Walters, Mineral Wells, Texas with the distinction of Soldier of the Year.

The Oklahoma State Regents for Higher Education is a nine-member constitutional board that coordinates all 25 public higher education institutions in Oklahoma. The board prescribes academic standards of higher education, determines functions and courses of study at state colleges and universities, grants degrees, makes budget requests to the Legislature, allocates funding for each college and university, recommends proposed fees within limits set by the
Legislature, and manages numerous scholarships and special programs. State
regents are appointed by the governor for nine-year terms.