First United Bank is corporate sponsor and Southeastern Oklahoma State University is the Education sponsor for the annual event, which honors area high school students and is held in the Visual & Performing Arts Center.

Odom was named inside linebackers coach by OU head coach Lincoln Riley in January of this year. He is a 2004 graduate of Southeastern and a former Savage running back.

An all-state high school player in his hometown of Ada, Odom was named the Oklahoma High School Player of the Year in 1999 by The Tulsa World. He attended OU for two years and was a redshirt on the Sooners’ 2000 national championship team.

He later transferred to Southeastern, where he was a three-year starter at tailback, earning first-team Lone Star All-Conference honors as a senior. 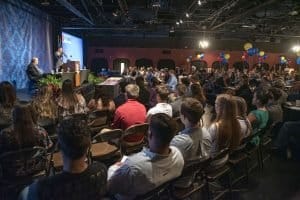 Odom spent the last two seasons at Missouri as the Tigers’ outside linebackers coach, where his brother Barry is the head coach.

A total of 91 students representing 16 schools were honored at Tuesday’s event.

Following is the list of award recipients, listed by school: