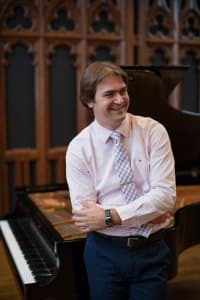 The concert will begin at 7:30 p.m. in the Fine Arts Recital Hall. The event is free and open to the public.

This recital is part of the 47th season of the Musical Arts Series sponsored by the Ruth Steger Piano Institute and the Clark & Wanda Bass Foundation Lectureship.

Internationally acclaimed pianist Silvan Negruţiu has performed concerts around the world. He has appeared as soloist with prestigious orchestras including the Romanian Radio Chamber Orchestra, Alicante Philharmonic, George Enescu Philharmonic and Dublin Symphony Orchestra. Some of his concerts have included live television and radio broadcasts. He is a laureate of numerous international competitions, including the “Roma 2000” and Salerno “Beethoven e i classici” in Italy; the “Seiler” in Sofia, Bulgaria; the “Feis Ceoil” in Dublin, Ireland; and the “Konzerteum” in Pireas, Greece.

He currently resides in Decatur, Illinois, where he is Associate Professor of Piano and Chair of Keyboard & Instrumental Studies at Millikin University School of Music.