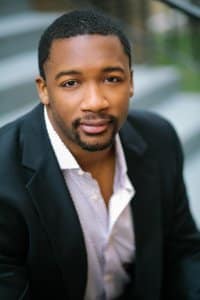 Garrett, whose performances have been called “scene-stealing” by the New York Times, is enjoying a varied and exciting career. In the 2019-20 season, he will return to Washington National Opera where he will perform Masetto in Don Giovanni, as well as Jake in Porgy and Bess. He will also make his Metropolitan Opera debut, singing Jim in Porgy and Bess.

Garrett is a former winner of the George London Foundation Competition, and has received top prizes in more than a dozen international vocal competitions.He is a graduate of the University of Cincinnati College-Conservatory of Music, Texas Tech University and the Academy of Vocal Arts, where he was a resident artist.

This recital is given by Mary Katherine Hodge in honor of Carroll Staton and in part by a generous grant from the Oklahoma Arts Council. The Oklahoma Arts Council is the official state agency for the support and development of the arts. The agency’s mission is to lead in the advancement of Oklahoma’s thriving arts industry. The Oklahoma Arts Council provides more than 400 grants to nearly 225 organizations in communities statewide each year, organizes professional development opportunities for the state’s arts and cultural industry and manages works of art in the Oklahoma Public Art Collection and the public spaces of the state Capitol. Additional information is available at arts.ok.gov.