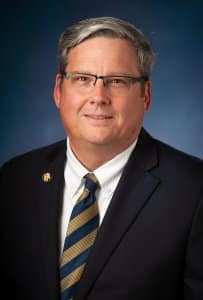 Dr. Thomas Newsom, who currently serves as Interim Vice President for Student Success and Dean of Students at Texas A&M-Commerce, will assume the duties as 21st  president of Southeastern on April 30. (Interim Southeastern president Bryon Clark will complete his duties at Commencement on May 9.)

The Board of Regents of  the Regional University System of Oklahoma (RUSO) made the announcement Friday at its regularly scheduled meeting at the University of Central Oklahoma in Edmond.

“We had a number of  outstanding candidates for the position,’’ said Regent Chair Susan Winchester. “After thoughtful deliberation by the Board, Dr. Newsom emerged as the best candidate to lead Southeastern into the future. The University has experienced significant growth in enrollment and other areas over the past few years, and we believe Dr. Newsom has the ability to build upon that success. He and his family will be a great asset to the Durant community. We would also like to express our appreciation to the screening committee and the Higher Education Leadership Search firm for their assistance throughout the process.’’

Dr. Newsom joined A&M-Commerce in April 2018.  Prior to that, he was President of Mesalands Community College in Tucumcari, New Mexico, which saw a double-digit increase in enrollment and improved graduation rates during his five-year tenure. While at Mesalands, he also served as Chair of the President’s Academy Executive Committee of the American Association of Community Colleges (AACC).

Prior to assuming the presidency at Mesalands, Dr. Newsom served in numerous capacities for 13 years at The Art Institutes, including a six-year stint as president of The Art Institute of Dallas and four years as Vice Chancellor at South University.

He also has experience in media relations as the Director of Media Relations for the Southland Conference and Assistant Sports Information Director at Baylor University and Northwestern State University.

He and his wife Victoria have three children.

Dr. Newsom will replace  Sean Burrage, who left Southeastern last October to  accept the position of Vice President for Executive Affairs at The University of Oklahoma. Since that time, Dr. Bryon Clark has assumed the duties of interim president of Southeastern. Clark earlier announced his intentions to retire May 1.

A total of 56 applications were received for the position.

The hiring concludes a four-month search that began last fall. To assist in the process, the regents utilized the Higher Education Leadership Search firm and an 18-member screening  committee composed of regents, faculty, staff, student representative,  administrators, and community leaders.

The regents conducted online interviews with eight candidates on January 8, and then interviewed  three finalists in-person on January 22 before reaching their decision today.