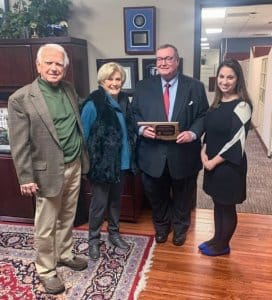 Anna Antuono and Governor George Nigh and Donna Nigh present a plaque to Chancellor Glen. D. Johnson in honor of his many years of service.

DURANT, Okla. – Anna Antuono, a junior at Southeastern Oklahoma State University, recently attended the Nigh Leadership Academy as a Nigh Scholar. The Academy was held at the University of Central Oklahoma.

The George and Donna Nigh Public Service Scholarship was established in 1999 to allow each of the two-and four-year higher educational institutions, both public and private, to select and honor one student each year as a Nigh Scholar. Each student is selected and nominated by their institution’s president and receives a one-time $1,000 Leadership Scholarship.

The scholarships are provided to the scholars at the conclusion of the five-day Leadership Academy in Oklahoma City. The academy is an intense mixture of personal development sessions on expanding personal skills and understanding of leadership. The academy provides all program and personal expenses.

The academy is supported by the Oklahoma State Regents for Higher Education, which contracts with the Nigh Academy for implementation. During the history of the academy, more than 600 students have been awarded the title of Nigh Scholar.