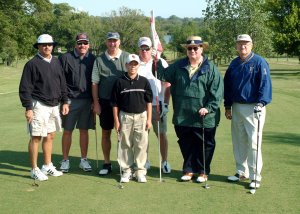 DURANT, Okla. – Back in the day, Ronnie Gooch made quite a name for himself as as a second baseman for coach Don Parham’s Southeastern Savages baseball team.

A four-sport standout at Midwest City (Oklahoma), Gooch played on three Savage teams that captured Oklahoma Collegiate Conference championships. He was also a member of the 1977 Savages squad that advanced to the finals of the NAIA College World Series, losing in the championship game.

In addition, Gooch was a two-time All-Conference selection, and in 1978, he  was named the Oklahoma Collegiate Conference Player of the Year. He was also selected as an NAIA All-American, while playing alongside the likes of fellow All-Americans Brett Butler and Scott Loucks. And guiding the team during this era were two of the greatest college baseball coaches in history – Dr. Parham and his assistant, Mike Metheny (who went on to become the winningest coach in NCAA Division II history).

Gooch was drafted by the Texas Rangers and played five years in the minor leagues, only to suffer career-ending injuries.

He returned to Southeastern in the mid-1980s and earned bachelor’s  and master’s degrees in education and is now retired after teaching, coaching, and working in the automobile business.

He was inducted into the Southeastern Athletics Hall of Fame in 2002.

Today, you’ll find another Gooch – Talor Gooch – carrying on the family tradition of athletics excellence. The 28-year-old is currently building a promising career on the fairways and greens of the Professional Golfers Association (PGA) Tour. And while he has yet to capture his first official tour win, he’s been close, becoming a consistent money-winner competing against the likes of Tiger Woods, Rory Mcllroy, Justin Thomas, Jordan Spieth, Brooks Koepka, Dustin Johnson and others.

Last Sunday, Gooch was paired in the final round with Johnson (a former U.S. Open champion and winner of 20 tournaments) at the Genesis Invitational at famed Riviera Country Club in Los Angeles. The two players tied for 10th place, four shots behind winner Adam Scott, with both pocketing  $234,825 for their efforts.

After barely surviving the cut in LA, Gooch zoomed into contention with a third round seven-under-par 64.

And it just so happened that the third member of the Gooch-Johnson pairing was Max Homa, one of Gooch’s best friends on tour. Homa tied for fifth at the event.

Gooch  is taking this week off before heading to Florida for four consecutive tournaments, including the Arnold Palmer Invitational at Bay Hill and The Players Championship at TPC Sawgrass.

After graduating from Oklahoma State in 2014, Gooch turned pro, steadily working his way up on the Mackenzie Tour (Canada) and Korn Ferry Tour (where he won the 2017 News Sentinel Open on what was formerly the Web.com tour). He earned his PGA Tour card in 2018 by virtue of  his high ranking on the Web.com tour.

Like many young players, Gooch struggled with inconsistent play his first couple of years on tour, fighting to make 36-hole cuts.

But he has found his groove in the 2020 season (which began last fall), making 10 of 11 cuts and winning $787,442 to date, which ranks him 58th in the FedExCup standings.  (FedEx points are critical because to keep your exempt status as a player, you must rank in the top 125 at the end of the season).

“There’s no substitute for experience,’’ Gooch said of his improved play this year. “And along the way, you get a better understanding of golf courses and how they play in certain conditions.’’

Gooch’s best finishes thus far have been a tie for third at the 2019 Farmers Insurance Open, and fourth place ties at the 2019 Desert Classic and 2020 Houston Open.

During his PGA career, Gooch has made the cut in 33 of 57 events, earning in excess of $2.5 million.

“If I can drive it well and get it in the fairway, I stand a good chance (of playing well),’’ he said. He added that his iron play is normally the strongest part of his game, but hasn’t been as good as he would like recently.

So what will it take to put him over the top to win his first tour title?

While Talor did not attend Southeastern, choosing OSU, a school steeped in golf tradition, he does have fond memories of Durant.

And the sixth member of the victorious team?

An 11-year-old golf prodigy by the name of Talor Gooch, who also won the long drive and closest-to-the-pin contests. (And by the way, he did not accept any of the prizes, his dad Ronnie recalled with a laugh).

Talor credits his family —  parents Ronnie and Ambre and wife Ally – for their support as he continues to chase his goals.

“My mom and dad are super – they made so many sacrifices for me growing up so I could travel to tournaments. As far as goals, I have one goal – to be the best I can be. And I don’t know what that is until I get there.’’