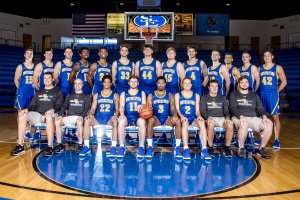 DURANT, Okla. – The Southeastern men’s basketball team looks to build on a successful regular season as they head into the Great American Conference Tournament this week.

The Savage Storm defeated Ouachita Baptist 91-77 Saturday afternoon, to finish the season 22-7 overall and 16-6 in GAC play. The sixteen wins in conference play, ties for the most since joining the GAC in 2011.

Southeastern will enter the GAC tournament as the number two seed and will play seven seed Southern Arkansas at 12 p.m. on Thursday in Bartlesville in the quarterfinals. The winner will advance to play on Saturday at 2:15 p.m. in the semi-finals.

Southeastern enters this week with a number three ranking in the NCAA Division II central region with two more sets of rankings still to be released. The top eight teams in each region will advance to the NCAA tournament.