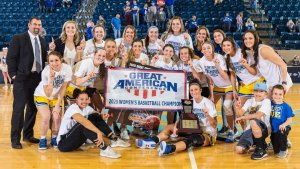 The win gives the Savage Storm a 22-7 overall record and an automatic berth in the NCAA Division II Tournament. Southeastern will come into the tournament as a five seed and will play four seed Emporia State on Friday, March 13 at 7:30 p.m. in Warrensburg, Missouri.

This marks the fifth time women’s basketball has advanced to the NCAA Division II Tournament and third under head coach Darin Grover.

The Savage Storm men have also earned an at-large berth in the NCAA Division II Tournament for a second-straight season after finishing the year 23-8 and advancing to the semi-finals of the GAC Tournament. Southeastern will enter as a three seed and will face six seed Rogers State on Saturday, March 14 at noon in Maryville, Missouri.

Southeastern will be making their third overall appearance in the NCAA Division II Tournament and second under head coach Kelly Green.

Games will be live streamed and links can be found on the athletic website at www.GoSoutheastern.com. Full brackets can be found at NCAA.com.