DURANT, Okla. – Bill Brock has reached the pinnacle of success in coaching, having been a part of three women’s basketball national championships at Baylor University.

A try for back-to-back titles during March Madness this season was thwarted not by an opposing team, but by the COVID-19 pandemic, which caused the NCAA to cancel its postseason tournaments.

Prior to the cancellation, the Lady Bears were ranked third nationally with a 28-2 record, and had just captured their 10th consecutive Big 12 regular season title going into the conference tournament (also canceled).

“We thought we had a really good chance to get back to the Final Four,’’ Brock said recently. “But we have a really good nucleus coming back next year, and we’ve signed two high school All-Americans.’’ 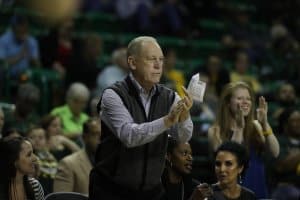 The Lady Bears were on the team plane in Waco waiting to fly to Kansas City for the conference tourney when Mulkey received a phone call halting the trip.

“And then the tears started to flow from our seniors,’’ Brock said.

Among his many fond memories of Southeastern are watching coach Duke Christian’s Savage football team and its “ahead of the times’’ pass-oriented offense in the 1970s. Ironically, Christian left Southeastern in 1979 to join Grant Teaff’s staff at Baylor.

And among his longtime friends from Southeastern are Hall of Fame baseball coach Mike Metheny and wife Pat.

“I’m so proud of the success Mike had there,’’ Brock said. “So many really great people have come from Southeastern.’’

Brock’s path to coaching Division I women’s college basketball is an interesting story.

After serving as an assistant for six years at his alma mater (Durant High School) under Alvie Nelson, he was promoted to head boys basketball coach in 1982.  And during that time, Brock became quite familiar with the buzz created by Southeastern basketball coach Jack Hedden, Dennis Rodman and company at Bloomer Sullivan Gymnasium.

Three years later, he joined legendary coach Wayne Cobb as an assistant at East Central in Ada. It was under Cobb, Brock said, where he learned “so much about the defensive end of the floor,’’ which has served him so well throughout his career. (He also cites former coaches Gene Davis, Jerry Smith, and Gene Robbins as among those having influenced his career. Davis coached at several high schools, as well as at the University of Science and Arts of Oklahoma; Smith formerly coached at Eastern Oklahoma State College and is now athletic director at Arizona Western; and Robbins, deceased, coached at several high schools and at such colleges as Murray State, Kansas State, North Texas, Louisiana Tech, and Southwestern Oklahoma).

Two years later, Brock was named head women’s coach at Grayson College in Denison, Texas, where he had once played for coach Jim Spivey, a legendary player at Southeastern.  Brock enjoyed phenomenal success at Grayson from 1987-2000; during that time, he compiled a record of 371-50 to go along with 10 conference championships and two trips to the national tournament.

Grayson honored its former coach on November 8, 2019, by selecting  him to the school’s inaugural Athletics Hall of Fame class. In addition, Viking players now compete on “Bill Brock Court.’’ (Earlier this year, Brock was named to the A STEP Up Assistant Coaches Hall of Fame).

“That was a pretty special evening,’’  Brock said of the Grayson honors. “But the real MVP is my wife Janice (Wheeler), who has stood by my side throughout my career.’’

The two were high school sweethearts in Durant and have been married for 45 years. Janice is the daughter of Alfred Wheeler, who still resides in Durant, and the late Margie Wheeler. The Brocks have two daughters who reside in Lorena, Texas, and four grandsons.

“My family and where we live are my top priorities,’’ Brock said when asked about the lure of potential head coaching jobs. “I’m an Oklahoma and Texas kind of guy – Durant and Southeastern hold a special place in my heart. Kim hired me and let me work. It would have to be a very special situation for me to leave.’’

Brock and Mulkey had first met when he was coaching in junior college and she was an assistant at Louisiana Tech recruiting a Grayson player.

When Mulkey got the Baylor job in 2000, she called and asked Brock if he would be interested in helping to build the program in Waco.

And the rest is history.

At Baylor, Brock has played an instrumental role in the Lady Bears winning national championships in 2005, 2012, and 2019, reaching the Final Four in 2010, and making six Elite Eight appearances.

Of Mulkey,  Brock says,  “she holds all the players accountable, but is very fair. When we’re recruiting, we look at athleticism and ability, but we also look at the character and integrity of the kid. We want kids who really desire a college education. That’s a priority for Kim. But I think what sets us (Baylor) apart is our work ethic – both our staff and our players.’’

Brock actually left Waco for a three-year period in the 2000s to serve as an assistant at Texas Tech, but rejoined Mulkey and Baylor in 2008-09.

And over the years, Brock has earned the reputation as an ace recruiter and  defensive guru, with a particular ability to coach the post position, which fits in nicely with his coaching philosophy of  “work the players hard and have high expectations.’’

A simple philosophy, perhaps, but one that has proved to stand the test of time.