DURANT, Okla. – Even in the best of times, being a college president presents its own unique challenges. But those challenges have perhaps never been greater than in today’s world when college administrators find themselves dealing with unprecedented health, enrollment, budget, and funding issues due to the ongoing COVID-19 pandemic.

Dr. Thomas Newsom, who began his duties as the 21st president of Southeastern Oklahoma State University on April 30, says he is looking forward to the task at hand. 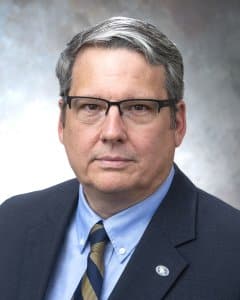 Newsom replaces Dr. Bryon Clark, who served as interim president from October 2019 through April 2020. Prior to that, Sean Burrage was president of Southeastern for five years – he is now vice president for executive affairs at the University of Oklahoma.

“There’s no question that Southeastern is in a better position to deal with these challenges than many institutions because of the leadership of Dr. Clark and President Burrage,’’ Newsom said. “The University has a dedicated faculty and staff, growing enrollment, and solid financial standing. Our job now is to build on that foundation as we move forward.’’

Like most universities, Southeastern has not held face-to-face classes or held any activities due to the pandemic since March, although spring classes have continued online. Summer classes are also scheduled for online delivery.

Southeastern recently announced the intent to move away from 100% remote learning and return to an active campus this fall.

“We must do this intentionally, with the safety and security of our campus and community as a priority, while balancing the importance of an environment that promotes student success,’’ Newsom said. “In order to achieve this goal, I will commission a task force, representative of campus and community leaders, to study all issues related to resuming classes on campus this fall. This task force will be charged with making recommendations that guide us all back to campus in a way that is in the best interests of our university and community.’’

The Regional University System of Oklahoma (RUSO) Board of Regents announced Newsom’s appointment on January 31, 2020.

For the past two years, Newsom served as Interim Vice President for Student Success and Dean of Students at Texas A&M-Commerce. Prior to that, he was President of Mesalands Community College in Tucumcari, New Mexico, which saw a significant increase in enrollment and improved graduation rates during his five-year tenure. While at Mesalands, he also served as Chair of the President’s Academy Executive Committee of the American Association of Community Colleges (AACC).

Prior to assuming the presidency at Mesalands, Newsom served in numerous capacities for 13 years at The Art Institutes, including a six-year stint as president of The Art Institute of Dallas and four years as Vice Chancellor at South University.

He and his wife Vicky have three children.