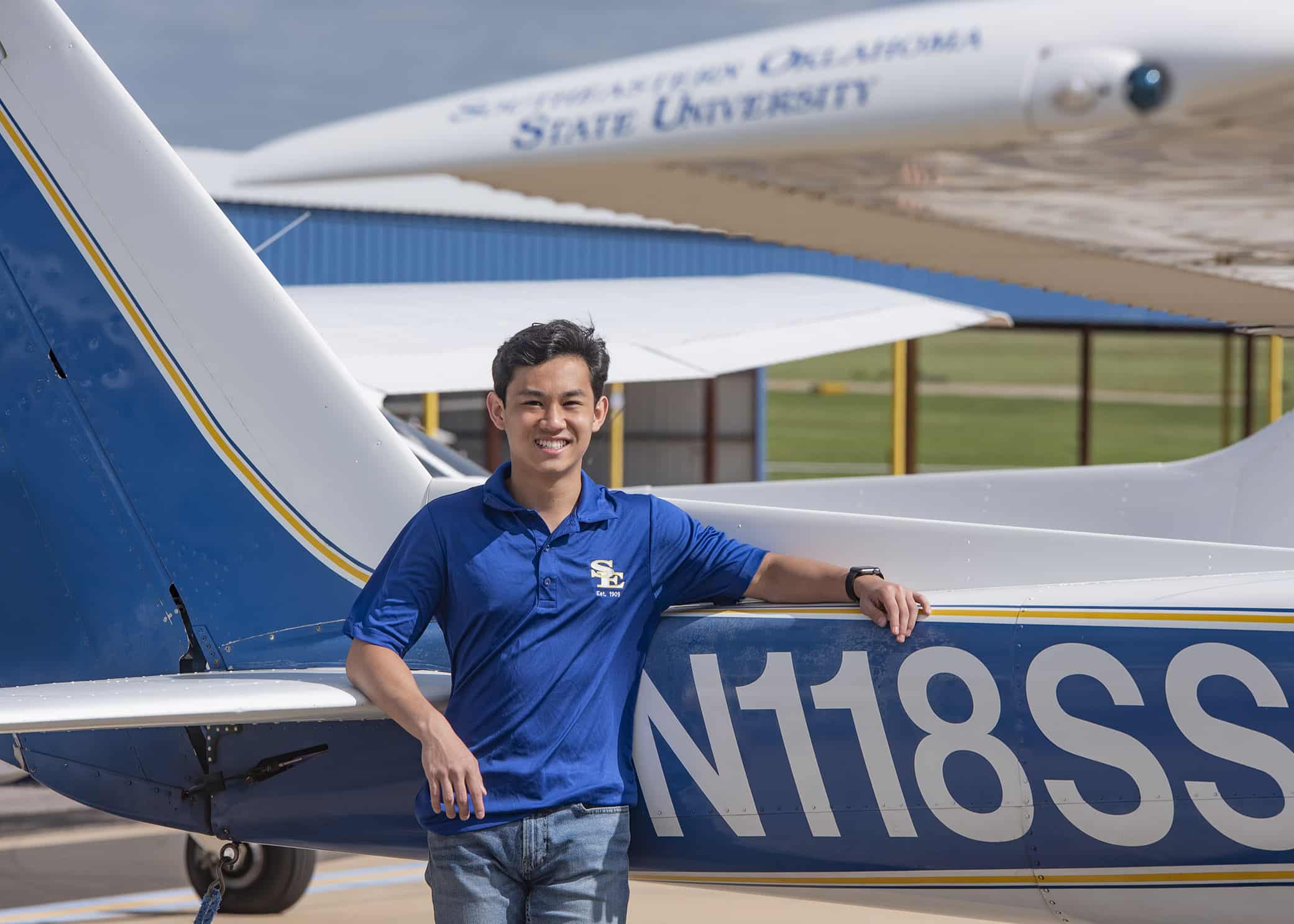 DURANT, Okla. – When Jacob Tran landed in Durant in the fall of 2017, he quickly found a home in two of Southeastern Oklahoma State University’s most storied programs – Aviation and Honors.

The senior Aviation Professional Pilot major  is scheduled to graduate next May and plans to pursue a career – as one might guess – as an airline pilot.

A native of Arlington, Texas, Tran graduated from a large high school (Arlington Martin) in the Dallas-Fort Worth Metroplex.

His parents (Steve and Justine) and grandparents were born in Vietnam and came to this country in the 1970s, eventually settling in Louisiana before moving to Texas.  Justine Tran is an accountant and Steve Tran is an electrician, while Jacob’s  sister attends the University of Texas at Arlington and his brother is a UTA graduate. Both are in the field of Information Technology/Marketing.

So how did Jacob find his way to Southeastern?

“I was interested in aviation and a friend of our family who flies for American Airlines recommended Southeastern to us,’’ he said. “We came here up for a campus visit during my senior year of high school.  The biggest thing I remember was that everyone was very friendly and welcoming. That made quite an impression on my mother – she had grown up in a small town in Louisiana (Pineville) and liked the atmosphere. In high school, I had a small circle of friends, but here, it’s been a new experience, venturing out to make new friends.’’

Tran, a soft-spoken, articulate 21-year-old, has been a member of the Student Government Association, but has also made fast friends through his aviation classes and involvement in the Honors Program.

Southeastern’s highly-regarded aviation program dates back to 1966, while the Honors Program was founded after the establishment of the Parsons Scholar Endowment in 1978.

Honors is an academic program centered on collaborative and hands-on learning. Students take a core curriculum of honors courses which complement their general education and major requirements. In addition, students participate in professional and cultural enrichment activities. Students must apply to the Honors program, with criteria including college entrance test scores and letters of recommendations; those accepted into the program receive scholarships to assist in their educational pursuits.

“I love his stories about his past flying experiences,’’ Tran said of Sauls. “He always make his classes interesting.’’

Tran is a fan of the honors director as well.

“Dr. Cotter-Lynch does everything possible to ensure we are successful as students,’’ he said. “She is a very caring person, and is always advocating for students.’’

Tran says moving to a new country was a “big deal’’ for his family.

“The Vietnamese culture is very family-oriented,’’ Tran said. “They want you to succeed in whatever you do, and that’s what I’ve gotten from my family. Our grandparents instilled in us the importance of getting an education – something they did not have the opportunity to achieve. ‘’

And while Tran embraces his Vietnamese culture, he also appreciates others.

“Coming to Southeastern, I had never experienced the Choctaw and Native American culture, but I don’t see that many differences (in cultures).  I think it’s always interesting to learn about other people and where they come from.’’

And like his mother, he also enjoys small-town life.

“Durant has a certain appeal,’’ Tran said. “Unlike in Arlington, when you go into a restaurant here, you see somebody you know. People here are more friendly — you can just feel the difference. And the open spaces – in Durant, you can see the stars at night.’’