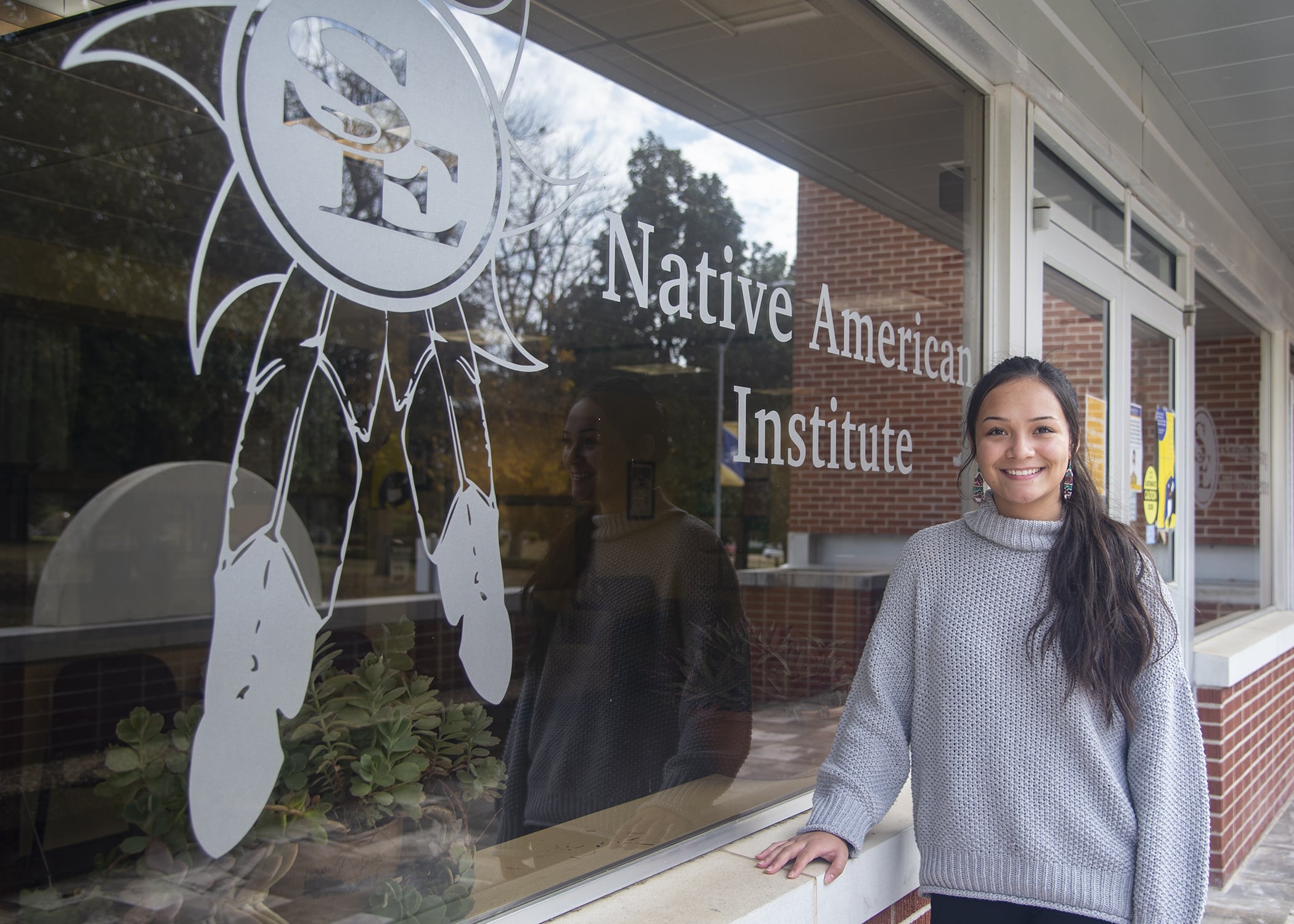 Jayda Janway is a communication major from Heavener, Oklahoma. The Southeastern freshman serves as president of the Native American Student Association, and is following in the footsteps of her two older sisters, both of whom graduated from Southeastern.

You might even call it part of a family tradition as the Heavener, Oklahoma, freshman is the last of three Janway sisters to make the 146-mile move to Durant.

And Jayda, a communication major and member of the Choctaw Nation of Oklahoma, is proud to follow in the footsteps of  Kelsey (’20 ) and Sierra (’17). All three are first-generation college students/graduates.

“They are my role models and I have always wanted to be like them,’’ Jayda said. “As for choosing Southeastern, Durant is not too far from home (Heavener is about 45 miles southwest of Fort Smith, Arkansas), but far enough where I can start the next chapter in my life. Plus, the school is very affordable and I have family (sisters) here. (Kelsey is employed at First United Bank, while Sierra works at the Choctaw Nation of Oklahoma headquarters).’’

Like her two sisters before her, Jayda is deeply involved in campus activities, serving as president of the Native American Student Association and as a member of Sigma Sigma Sigma sorority. When not in class (17-hour load this fall) or studying, Jayda can be found working at the front desk as an office clerk at the Choctaw Nation headquarters. Her hobbies include Native American beadwork, in which she has started her own business.

Even while in high school at Heavener, Jayda exhibited leadership skills, chairing (as did Kelsey before her) the Choctaw Nation Youth Advisory Board for a 10.5-county area and representing the Le Flore County south chapter of the board.

“Through the advisory board, we learned leadership skills, how to react to life’s circumstances, and how to help people,’’ Janway said.

One of her favorite advisory projects was the Choctaw HEART Program, with  HEART being an acronym for health, exercise, awareness of what you put into you body, rest and recovery, and teamwork. The Le Flore south chapter implemented a special program involving frequent workouts using machines and incorporating yoga, CrossFit, and Zumba.

Janway says her career goal is to work in “advertising’’ for the Nation.

And like most college freshmen, she  says it’s been challenging making friends during the COVID-19 pandemic, which has limited activities and interaction among students.

“But we’re making connections in class and through Zoom,’’ Janway said. “I have a very large and diverse group of friends, and have had the opportunity to meet many international students.’’

“All three of them have reached out and helped me,’’ she said. “Dr. Prus is one of those professors who makes sure you clearly understand your assignments. That’s so important when you’re a freshman.’’