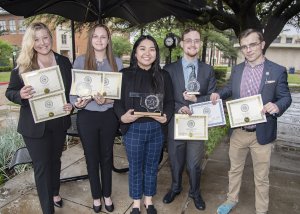 The O.I.L. is a student-run mock government that replicates all three branches of the state government of Oklahoma.

Southeastern students have been participating in the competition for several years.

In addition, a number of individual students from Southeastern earned recognition.

Southeastern students also served in a variety of leadership positions and successfully advocated for the passage of multiple proposed changes to state policy.

Legislation written by Christian Grinolds, Sophia Seay and Caleb Atchison were all approved by the O.I.L. Senate.

The legislation written by political science major Christian Grinolds was also passed by the O.I.L. House and signed by the organization’s governor. It will subsequently be forwarded to the Oklahoma State Legislature where it is expected to be referred to committee for consideration as an actual law for the state.