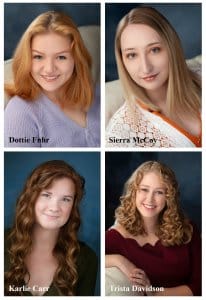 DURANT, Okla. – Theatre at Southeastern had the opportunity to enter its production of Eleemosynary into the Kennedy Center’s American College Theater Festival. This is a national theater program involving 18,000 students annually from colleges and universities across the country.

The production of Eleemosynary was adjudicated by two members of the organization and treated to a glowing response by Andy Long and Adriana Dominguez.

Long is the Director of Acting at the Richmond campus of Dallas College’s School of Creative Arts, Entertainment and Design.  He is the Texas Vice-Chair for the Kennedy Center’s American College Theatre Festival.

Dominguez, Ph.D. is an Assistant Professor of Theatre and Dance at the University of Texas at El Paso.  She is the Interim Leadership for the Kennedy Center’s American College Theatre Festival’s Region 6.  She is also the Representation, Equity and Diversity Co-Chair for the organization.

In addition, as a participating production, students are eligible to be nominated to participate in the Irene Ryan Acting Competition. Once nominated, students compete at the regional level and, if selected, at the national level. Students who are selected can earn up to $5,000 in scholarships.

Irene Ryan was best known for her role as Granny on The Beverly Hillbillies TV show, but was also a classically trained actor who performed on Broadway multiple times.

Theatre at Southeastern had three cast members nominated to participate in the Irene Ryan Acting Auditions from their work in Eleemosynary.

Karlie Carr, who played the role of Dorothea, is a junior acting/directing major and dance minor from Kingston, Oklahoma. She is a member of the SPARKS Dance Team and Vice President of Alpha Psi Omega, a theatre fraternity.

Sierra McCoy, who played the role of Artie, is a senior acting/directing major with a history and dance double minor from Tulsa, Oklahoma. She is a member of the SPARKS Dance Team and Alpha Psi Omega, a theatre honor fraternity.

Dottie Fuhr, who played the role of Echo, is a sophomore acting/directing and musical theatre double major from Sherman, Texas. She is a member of the Chorvettes Stageworks Company, the SPARKS Dance Team, and Alpha Psi Omega, a theatre honor fraternity.

And Trista Davidson, stage manager of the production and a junior theatre acting/directing major from Durant,  received a meritorious achievement commendation.

Theatre at Southeastern’s production of Eleemosynary was led by a creative team that included the following: