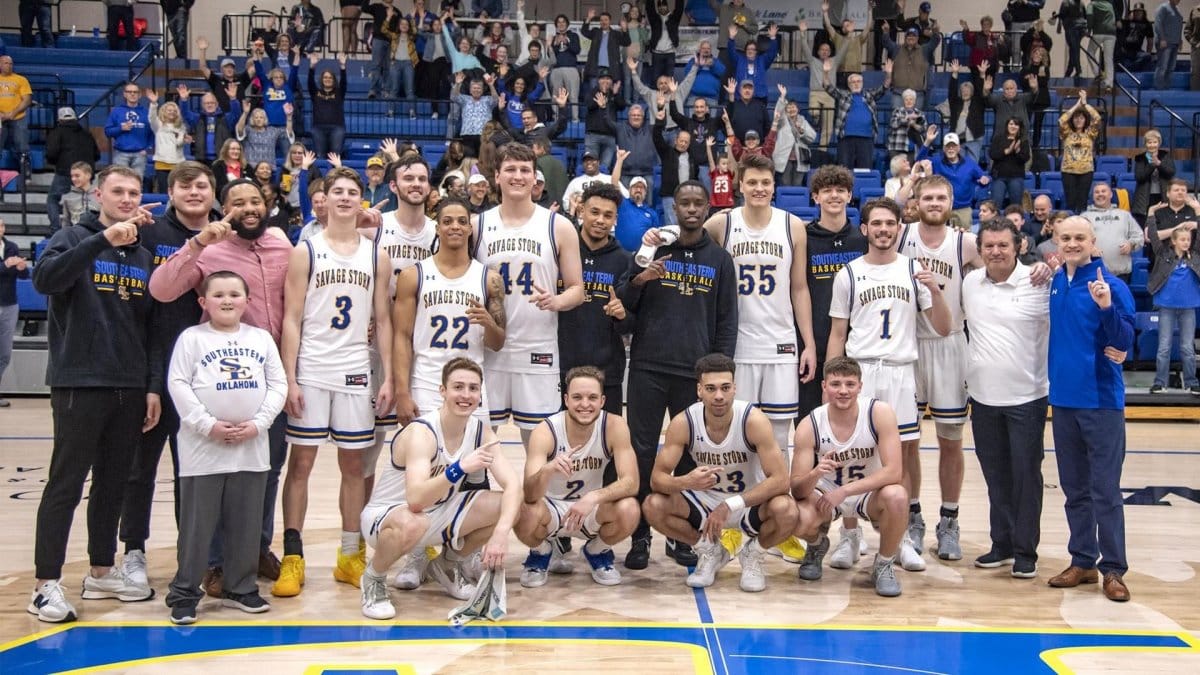 The win lifts SE to 23-5 on the year overall and 18-4 in GAC play, with the next stop on the journey coming on March 3 in Shawnee, Okla., when the top-seeded Storm take on East Central at 5:45 p.m. at Firelake Arena.

“The first two minutes didn’t look too good,” said head coach Kelly Green. “They came out and really got after us early on. They got into the passing lanes and we talked to the guys, we knew there was going to be some of that. It was just such an emotional game last night. And I’m really proud of the fact that we fought through some of those things and that’s what having good, senior leadership does for you.”

Jett Sternberger put together an impressive 34-point effort to lead all score3rs, hitting 11-of-17 overall from the field and 9-of-14 form three-point range.

Adam Dworsky was next in line with 15 points while dishing out a game-high seven assists, grabbing four rebounds and snagging three steals.

Ante Brzovic checked in with 14 points on 7-of-12 shooting and secured 14th double-=double of the season and the fifth in-a-row by hauling in a game-high 10 rebounds.

Bobby Johnson drained a trio of threes and finished with 11 points, while Kellen Manek added 10 points and pulled down eight rebounds.

Southeastern shot 49.2 percent from the field on the contest and added a 44.4 percent effort form beyond the arc where they knocked down 16 threes as a team on the night.

Six different players hauled in four or more rebounds as the Storm held a 42-to-23 edge on the glass over the team that came into the night second in the league in rebounding margin.

NWOSU opened the game with the first four points before the Storm would respond with a 7-0 run to take a three-point lead at the 15:24 mark.

The Rangers would briefly take the lead again at 8-7 just under a minute later, but SE answered with another 7-0 run, capped by a Sternberger three to take a 14-8 lead with 12:17 to play in the half.

NWOSU would whittle the advantage back down to two points, and at that point the Storm had seen enough, reeling off a 13-0 run with a Dworsky three giving SE a 27-12 lead with 8:32 remaining in the half.

Four minutes later that lead would hit a first-half high 17 points on a Sternberger three at 37-20, but a 12-4 run by the Rangers to end the half would cut the Storm advantage to 41-32 at the halftime break.

The lead would hit 20 points for the first time on the night on another Johnson three a minute and a half later.

That was as close as the game would get though, as SE would outscore the Rangers 28-13 over the final 11 minutes en route to a 91-60 victory.