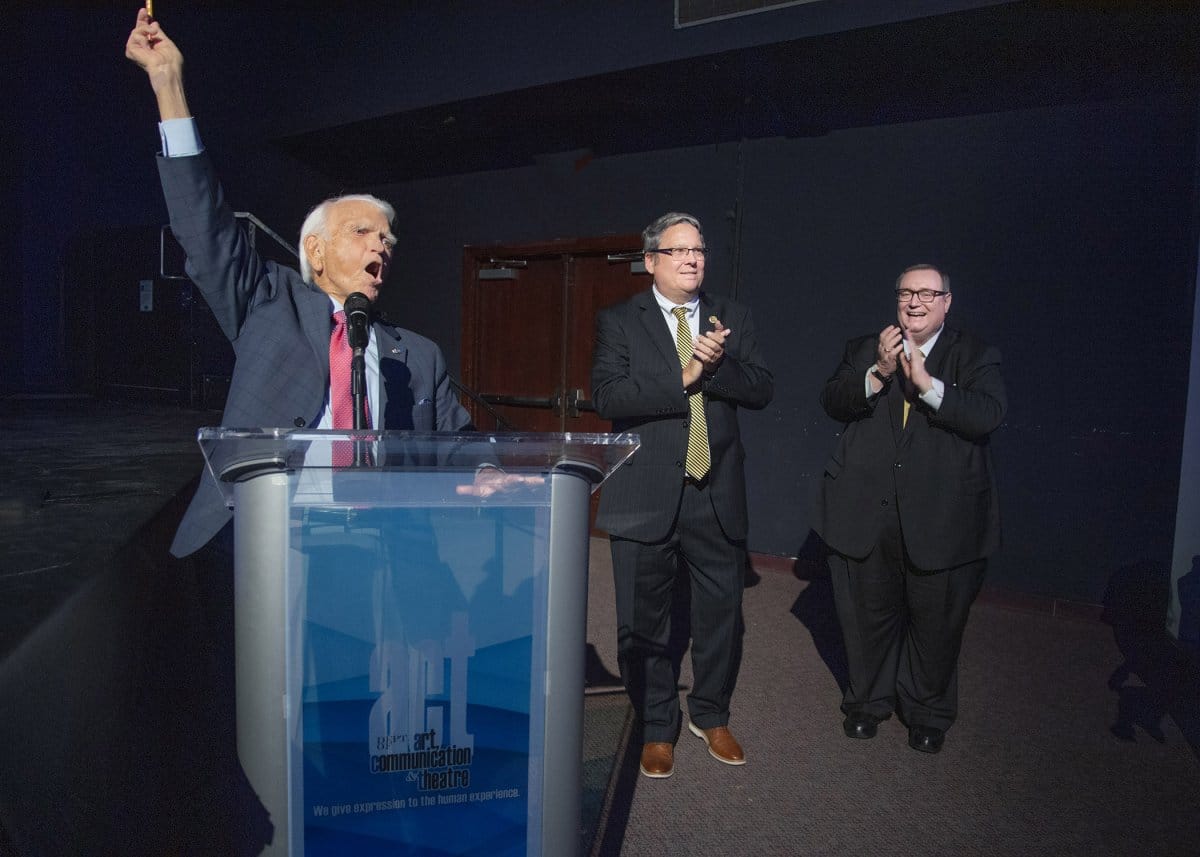 The premiere of Oklahoma! Friday night at Montgomery Auditorium received an extra boost of excitement with the guest appearance of former Gov. George Nigh.

Theatre at Southeastern and the Department of Music presented the epic Rodgers and Hammerstein musical on Friday and Saturday night and again on Sunday afternoon.

Taking the stage prior to Friday’s opening performance, Nigh offered an engaging history lesson.  In 1953, as a state legislator from McAlester, Nigh introduced a bill to make Oklahoma! the official state song. As Nigh related, the bill drew immediate opposition, as many legislators did not want to replace the then-current state song – “Oklahoma – (A Toast’’).

But Nigh had a plan. He delayed the bill for one legislative day, allowing him time to invite the Oklahoma College for Women Choir and Ridge Bond, who sang lead as Curly in the Broadway performance, to the House floor. With the House gallery packed, the college choir performed majestically, while Bond, in his Curly costume, strode to the microphone, bringing the house down.

The vote was then approved to make Oklahoma! the official state song.

Nigh, now 94, served as Governor and Lt. Governor of Oklahoma on two separate occasions. He later was president of the University of Central Oklahoma.

“It was a truly memorable night for Southeastern and the Durant community,’’ Newsom said. “The presence of Gov. Nigh and Chancellor Johnson made it an historic experience for all of us. We really appreciate their interest and taking the time to support Southeastern and our outstanding music and theatre programs.’’

The production was in rehearsal since early January; the musical was last performed at Southeastern 14 years ago.

“I can’t say how much we appreciate the support of the Durant community coming out to support live theatre,’’ said Coker, who is the director of theatre at SE. “Gov. Nigh has always been a warrior for the arts and was very helpful in securing funding for OSF (Oklahoma Shakespearean Festival).  Chancellor Johnson and Melinda have also been supportive of our efforts over the years, and today, President Newsom is carrying on that tradition as well.’’