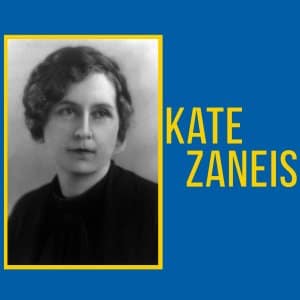 The 28th annual induction ceremony and banquet is scheduled for Nov. 1 at the Oklahoma History Center.

“We are honored that President Zaneis and Mr. Spencer are receiving this award,’’ said Southeastern president Thomas Newsom. “Both of them are deserving of this recognition after having made such long-lasting contributions to higher education.’’

In 1935, Zaneis was appointed as the ninth president of Southeastern — the first female to head a state college or university in the nation.

Although Zaneis only served as president from May 1935 to July 1937, she accomplished a great deal, including overseeing a 33 percent increase in enrollment, obtaining Public Works Administration funding for facilities, equipment, and athletic field improvements, increasing funding for student work programs, and in 1937, securing an appearance by First Lady Eleanor Roosevelt for a speech on campus and overnight stay at the President’s home.

Born in 1887 in Springplace, Georgia, Kate moved with her family to Ardmore, Oklahoma, and graduated from high school there in 1907.

She later served as principal of Lincoln Ward School in Ardmore.  In 1915, Zaneis became the superintendent of Lone Grove High School and Rexroat Consolidated Schools, and not long after, was on the summer teaching faculty at Southeastern State Teachers College (STC).

In 1920, while pursuing her bachelor’s degree at STC, Zaneis was elected as Carter County superintendent to work on rural school consolidation.

Later, as a member of the State Board of Education, she successfully achieved approval of sabbatical leaves for college faculty members. In 1935, shortly before she received her master’s degree from Oklahoma A&M (now Oklahoma State University), Zaneis was named president of STC.

Buddy Spencer graduated from Southeastern in 1953 with a bachelor’s degree in Education.  While attending Southeastern, he played basketball for the legendary coach Bloomer Sullivan for four years and served as the President of the Student Body.   Following graduation, he joined the U.S. Marine Corps.

Spencer returned from military service to enter the automobile business, first working for Chevrolet and then as an automobile dealer.  He has been in the automobile business for more than 50 years, starting with his first dealership, Buddy Spencer Ford in Durant.   He is now the owner of the Blue Ribbon Auto Group in Sallisaw, Oklahoma.

Spencer’s wife Doris is also a Southeastern graduate.  He was honored as a Distinguished Alumnus at Southeastern in 1982, and has received similar honors at Carl Albert State College.