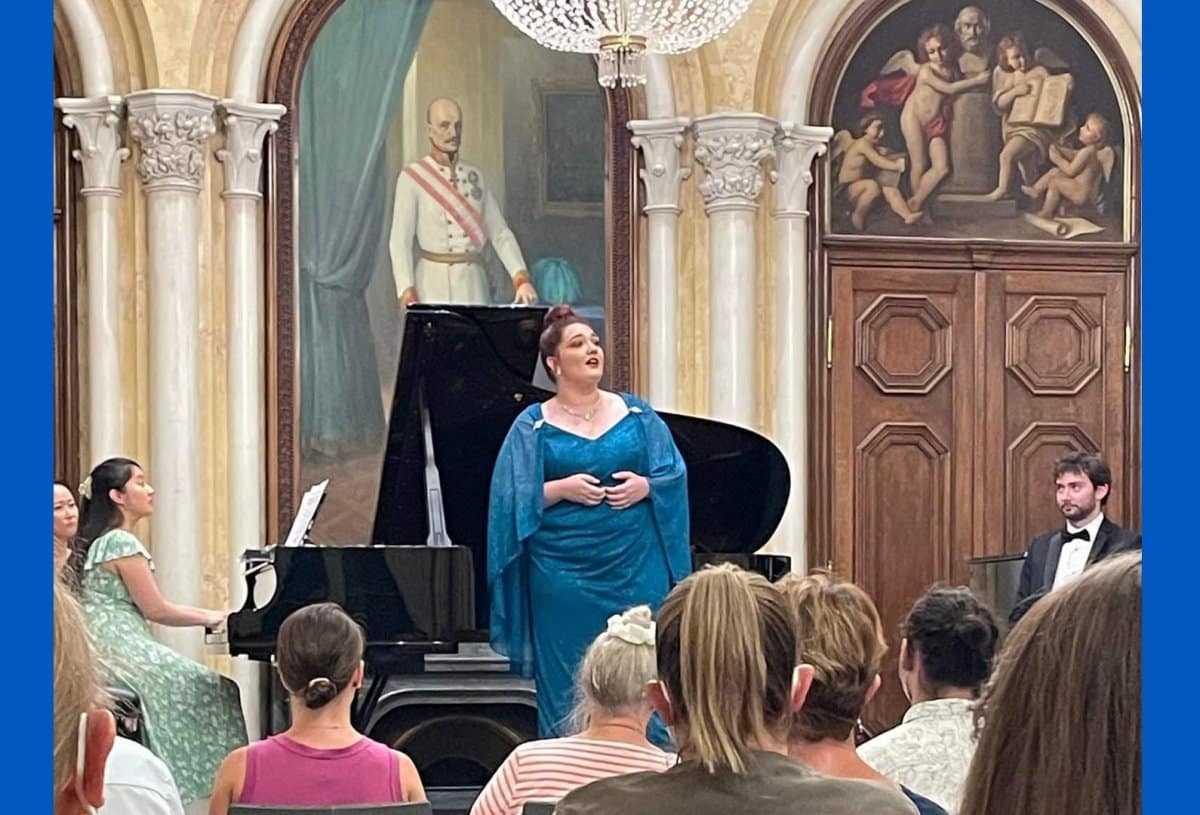 College students spend their summers in a variety of ways, from working to taking classes to enjoying a vacation.

But not many did what Lauren Manon Gibson did, which included a little of all of the above.  Gibson, a senior at Southeastern Oklahoma State University, studied and sang opera in Europe this summer. The vocal performance major from Antlers, Oklahoma, successfully auditioned and was accepted into two European study programs in opera and classical music.

“Music has always been very special to me, and some of my earliest childhood photos depict me holding a microphone,’’ Gibson said. “However, my love for classical performance began in high school and grew once I reached Southeastern. I have vivid memories of sitting in a math class and daydreaming about the things that I got to do this summer — singing in old Italian churches and meeting some of the most talented performers in opera.’’

Her summer began with “Opera In Concert,’’ a music and language program hosted at the University of Urbino in Urbino, Italy. She was one of seven students from the United States participating in the program; mornings were spent in four-hour blocks of Italian language classes with music and coaching on Italian arias, duets, and song repertoire, with afternoons at the Capella Musicale.

“As amazing as it all was, the best part was the performing,’’ Gibson said. “We performed in a pilgrimage church near a winery that was several hundred years old.”

She opened a concert with a performance of Schubert’s “Ave Maria.’’ Other performances included a duet from W.A. Mozart’s “Cosi fan Tutte,’’ the aria, “Senza Mamma” from Giacomo Puccini’s “Suor Angelica,’’ and chorus “Va, Pensiero” from “Nabucco’’ by Giuseppe Verdi.

Gibson’s second summer program excursion began at The American Institute of Musical Studies (AIMS) in Graz, Austria, just a couple of weeks following the Italian program. Students participating in the AIMS program choose to audition in the Opera Studio or the Lieder Studio for a 6-week intensive educational program.  The Lieder program provides everything the serious musician needs to successfully embark on a professional career: intensive study in technique, immersion in opera and lieder rep, consultation on career strategy, and numerous networking opportunities.

Gibson, who auditioned as part of the Lieder Studio, participated in courses such as Poetry of German Lied, Acting and Stage Presence, German Language, Lieder Performance workshops, and multiple lecture series courses covering all things classical music and voice. In between her class schedule, she had two vocal sessions a week over the  Lieder repertoire, two voice lessons a week,  as well as scheduled diction meetings with faculty and pianist rehearsals.

Gibson is in the vocal studio of Dr. Jeremy Blackwood, Dean of Graduate Studies and Associate Professor of Voice in the Department of Music at Southeastern.

“I am extremely proud of Lauren,’’ Blackwood said.  “Her acceptance into the two summer programs is a testament to her hard work and determination to hone her vocal performance skills. I am honored that I can be along for Lauren’s journey – to help guide her toward meeting her goals in the world of opera and classical singing. I have no doubt that she will do well in the future.’’

Gibson said her summer abroad provided her with inspiration as she continues her education.

“I am incredibly proud of myself and what I have achieved,’’ she said. “This summer has only inspired me to continue learning and growing and to enjoy the process, not the goal. I’m so excited to be back at Southeastern to finish my studies in vocal performance and plan my next step. Now that I’m back, all my focus goes into “Suor Angelica.”

She will be performing the title role in Southeastern’s  production of “Suor Angelica’’ in October.