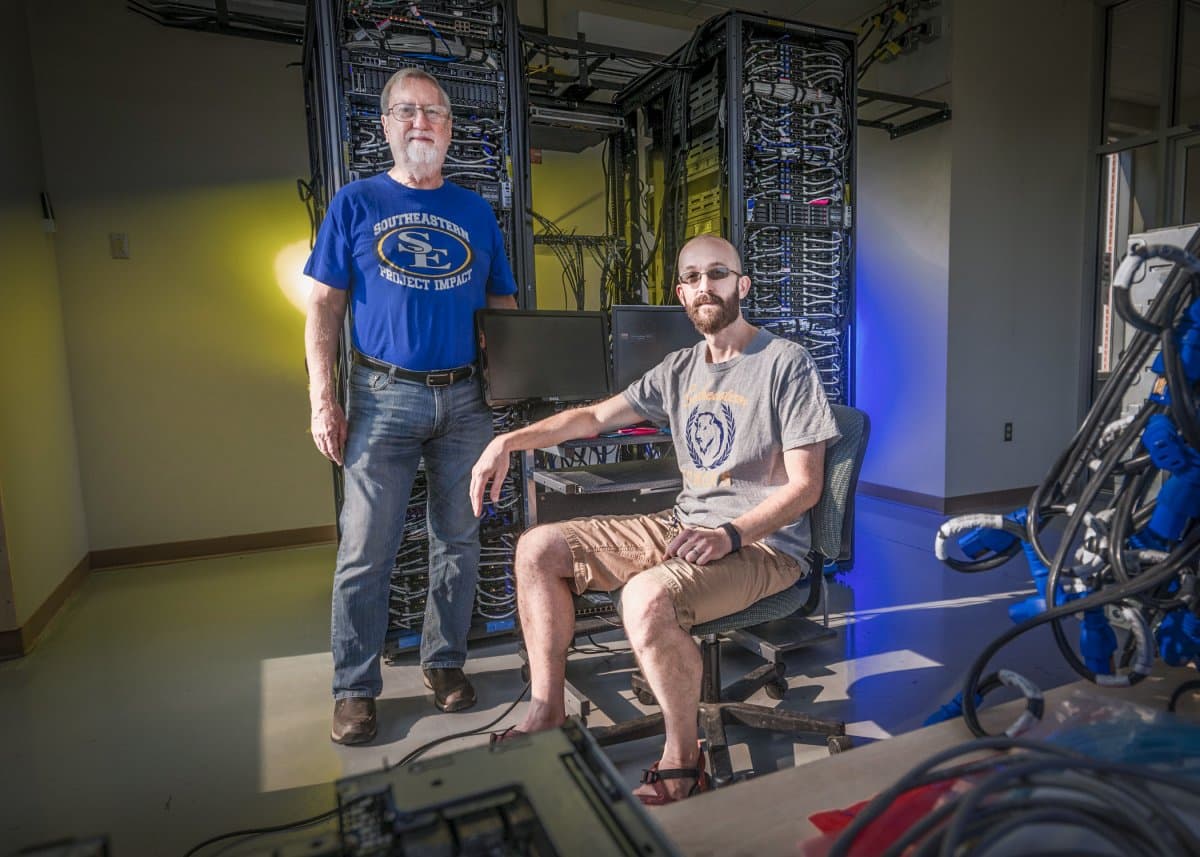 The age of supercomputing is thriving at Southeastern Oklahoma State University.

Supercomputing uses multiple computers in concert to process code or analyze data, giving it “super” powers to solve problems with huge information processing needs. Distributing the workload along with a fast network and abundant storage dramatically decreases the time required to perform tasks. In addition, some tasks are so complex, processing cannot be performed on one machine and can only be accomplished when spread across a network of machines. Programming for supercomputers, High Performance Computing (HPC), requires specialized instruction and access to supercomputers. Examples of areas of study with large data processing needs include weather, physics, DNA processing, and manufacturing.

Thanks to the decade-long efforts of SE mathematics professor Dr. Karl Frinkle and SE computer sciences professor Mike Morris (now retired), the University is now the proud owner of a state-of-the art supercomputer, which is the equivalent of approximately 1,000 desktop computers.

Students will directly benefit from the new technology.

“First and foremost, we will continue to offer high performance computing courses for our students, which is an important area of study for CS (computer science) majors and also for applied Math majors,’’ Frinkle said. “These courses teach the most common approach to high performance computing – compiling code to run across multiple machines, and this approach is available to anyone on campus who wishes to utilize the resources available.” In addition to computer science and mathematics majors, students in Behavioral Science, Biology, Chemistry, Physical Science, Social Science, and Business may benefit from the system.

A six-year-long research project in the Math Department is already utilizing the resources available on the new supercomputer, and at any given time at least one set of code is running on the supercomputer related to math-oriented research projects.  Due to the increasing prevalence of HPC, there exist resources for those who are unfamiliar with the HPC environment.  Programs, such as Open OnDemand (https://openondemand.org/), an NSF-funded open-source portal, give users a web interface to run code. A long-term objective is facilitating research of non-coding faculty through as many methods as possible.

Morris said the supercomputer will be of benefit to students now and later.

“If they go to work for a large organization, chances are the employer will own, lease time on one, or at least have access to a supercomputer,’’ Morris said. “Knowing what it is and what it’s capable of doesn’t hurt them, no matter what their position. And knowing how to run programs on it is a big plus for many jobs, and our students learn that. And a few (students) actually learn how to create programs. The fact that a supercomputer has many processors (computers) in its network makes it need “parallel programming,” which has similarities to regular programming, but requires a higher level of expertise, which our students receive.’’

Frinkle agreed, saying, “Once strictly the realm of large computer science departments and government facilities, HPC is mainstream. Engineering firms, medical research companies, and a wide variety of other organizations rely on supercomputers.  To remain competitive and relevant in the global marketplace, it is imperative that students are familiar with supercomputing environments.  In the newly established “Southeastern Center for Supercomputing, (SC2)‘’ students will learn not only how to program for supercomputers, but how to build and maintain them.  Managing supercomputers is a highly technical and an in-demand profession and will only increase for the foreseeable future.’’

For Southeastern, the path to the supercomputing world began more than a decade ago when Frinkle and Morris attended conferences and workshops to learn to build and use a miniature supercomputer.

The two professors’ continued involvement and connections at the state level led to Southeastern receiving various grants and equipment that made the supercomputer a reality at the University this year.