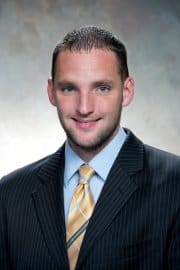 Allen served in the Department of Athletics from 2013-2019, most recently as the Associate Athletic Director for External Operations. He served on the senior leadership team and was responsible for marketing, promotions, social media, event management, corporate relations, special events, and the coordination of community engagement efforts for the athletic programs.

Allen was promoted to Assistant Athletic Director for Marketing and Promotions by Southeastern Director of Athletics Keith Baxter in July of 2015 after serving as assistant director of external operations from 2013-2015.

During his time as an athletics administrator, Allen was key in expanding Southeastern Athletics digital reach. He was instrumental in expanding social media presence, including the athletics official Twitter becoming only the second verified account in the Great American Conference. He was also key in the creation of sport-specific Twitter pages across the department as well as the creation of a rodeo-specific Facebook page. Allen worked closely with Keystone Broadcasting and Mix 96.1 FM in streaming broadcasts directly to the athletics Facebook page – a first in the department’s history.

Allen also increased corporate partnerships, both in number of partners and total revenue. He was also involved in bringing outside events to campus as a revenue generator including the Harlem Globetrotters.

Allen was also instrumental in the campaign “Strong Together” including webpage and marketing materials, which generated revenue for a renovated volleyball facility and new strength and conditioning facility. In addition, Allen worked with outside vendors for branding for both facilities.

Additionally, Allen assisted in the creation and launch of the first-ever online store for athletics – www.shopsavagestorm.com.

Allen also worked closely with the director of athletics on branding initiatives in facilities across the department.

Allen was one of seven NCAA Division II recipients of the Mike Clearly Stipend Award for the 2015 NACDA Conference in Orlando, Florida.