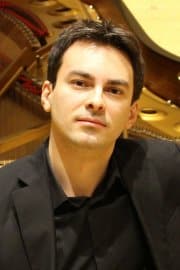 Romanian pianist Catalin Dima performed in many venues throughout the U.S., Europe, and Japan. Among his previous engagements, Catalin has performed at the Weill Recital Hall at Carnegie Hall, the Preston Bradley Hall (Chicago), the Cosmos Club (Washington D.C.), the International House (D.C. and NYC), the Romanian Cultural Institute (NYC), the Klavierhaus (NYC), the Karura Hall (Tokyo) and the Romanian Athenaeum (Bucharest).

Catalin is a strong proponent of Romanian music, especially classical with folk influences. Together with the Romanian violinist Alex Malaimare, Catalin started a project that includes lectures and promotes Romanian classical and folk music throughout the U.S. Their previous engagements included tours in Indiana, Illinois, D.C., Virginia, Oklahoma, and Texas.