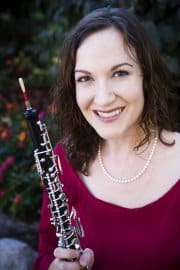 Kaycee was an Artist Certificate candidate at Southern Methodist University under Erin Hannigan, Principal Oboist of the Dallas Symphony Orchestra. Mrs. Thomas graduated with her Masters in Oboe Performance as a fellowship student at the University of Michigan under Dr. Nancy Ambrose King. Kaycee holds Bachelor of Music degrees with special distinction in Oboe and Voice Performance from the University of Oklahoma under the instruction of Ms. Johanna Cox, where she was named Outstanding Senior of the Weitzenhoffer Family College of Fine Arts in 2005.

Kaycee Ware Thomas is well versed as an oboe performer and pedagogue. Mrs. Thomas was the only oboist invited to represent the United States as a quarter-finalist in the 2008 Prague Spring International Oboe Competition. As the winner of the 2008 Sigma Alpha Iota Career Performance Grant, SAI supported her travels to Prague and featured Kaycee in an article in Pan Pipes, the international fraternity journal. Former Assistant Principal Oboe/English Horn with the Tulsa Symphony Orchestra for the 2006-2007 season, Mrs. Thomas also held the position of Second Oboe with the Dearborn Symphony for the 2007-2009 seasons. Other notable performances include the OK Mozart International Festival Orchestra-Amici New York, Portland (OR) Opera Orchestra, Tulsa Opera Orchestra, and the Oklahoma City Philharmonic, in addition to regional performances with the Avant Chamber Ballet orchestra and Allen Philharmonic.
Kaycee was recently the Adjunct Instructor of Oboe at Hillsdale College, a position she held for seven years, prior to joining the faculty of Southeastern Oklahoma State University. Mrs. Thomas currently runs a thriving private oboe and voice studio in McKinney. Her students have been accepted to prestigious music schools, such Northwestern, Cincinnati Conservatory, and Manhattan School of Music. Mrs. Thomas’ students have been accepted into Greater Dallas Youth Orchestra, Interlochen for oboe and musical theater, Michigan Youth Ensembles, and Detroit Civic Orchestra, to name a few, in addition to All-Region and All-State bands and choirs.