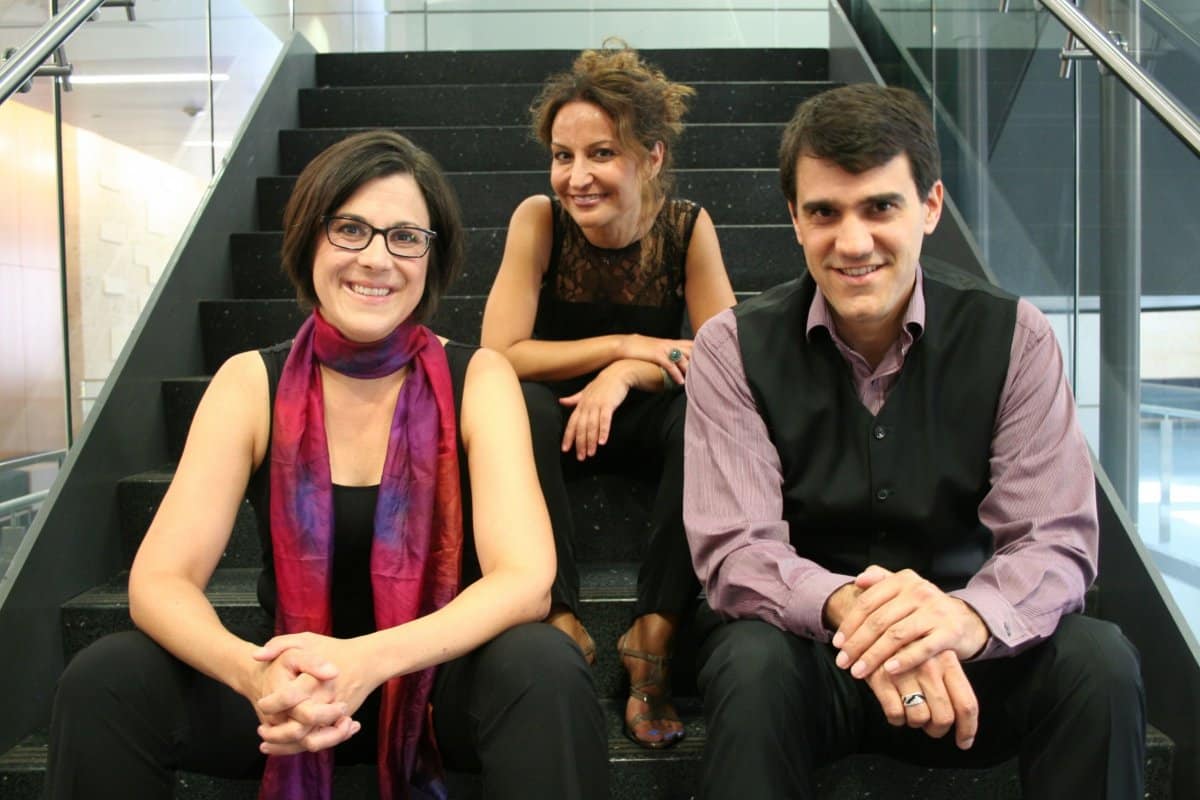 Ensemble TrioPolis merges the distinct temperament, stylistic influences, creative spirit, and artistic vision of three cosmopolitan musicians based in North Texas: German violinist Felix Olschofka, American clarinetist Kimberly Cole Luevano, and Greek American pianist Anatolia Ioannides. TrioPolis was born following a series of successful collaborations in the dynamic College of Music at the University of North Texas in Denton. As our friendship and artistic kinship grew, so did our desire to form an ensemble. Meeting regularly at a local coffee house, we shared our vision, ideas, goals and aspirations, and most of all, our passion for chamber music.

Since TrioPolis’ inaugural season in 2016, we have presented concerts consisting primarily of contemporary works in venues throughout the United States. TrioPolis’ numerous recent performances feature these compositions in conjunction with the vast repertoire for this combination created in the 20th century. We are committed to the continual growth of repertoire that explores of the expressive, textural, and timbral possibilities of our instrumentation in addition to the aesthetic, emotional and spiritual effects literary and visual arts references have on the presentation and interpretation of specific works.

German-born and raised violinist, Felix Olschofka has toured as a soloist, concertmaster, and chamber musician throughout Europe, Asia, North America, and South America. His playing has been described as “violinistic pyrotechnics” (TheaterJones Dallas), “charged with beauty” (Gramophone), “a true dream of romantic melodiousness” (General-Anzeiger-Bonn), and “remarkable for dramatic power” (Star-Telegram Fort Worth). Olschofka was awarded first prize in the German Music Competition in 1992 and second prize in the International Chamber Music Competition Charles Hennen in 1993. A proponent of contemporary music, he frequently presents the premieres of new works for violin and is a founding member of SWARMIUS and TrioPolis. His professional background also includes concertmaster with the Terre Haute Symphony, guest concertmaster with the Dallas Chamber Symphony and Shreveport Symphony, and associate concertmaster with the Brandenburg Philharmonic Potsdam, Germany. From 2011-2014, he led the Ensemble du Monde in New York City as their concertmaster. Olschofka has served as faculty at San Diego State University, Round Top Music Festival, Bay View Music Festival, Summit Music Festival, and is currently professor of violin and Associate Dean for Operations at the University of North Texas (UNT) in Denton, Texas, and founder and director of the UNT Summer String Institute. He holds bachelor and master degrees from the Music Conservatory Hanns Eisler in Berlin, Germany, a performance certificate from Indiana University, Bloomington, and a doctorate from the University of California San Diego. For more information, please visit www.felixolschofka.com

With reviews such as “breathtaking…” (The Clarinet), “virtuosic tone and technique” (Tampa Bay Times), “exceptionally sensitive and introspective rendition” (The Clarinet), and “a most skillful artist” (Fanfare Magazine), Kimberly Cole Luevano continually establishes herself as a formidable soloist and chamber musician known for poignant interpretations and inventive programming. Luevano’s recordings on the Fleur de Son label, “Bright Angel” (2013) and “Atonement” (2015), received critical acclaim and were considered in the Grammy nomination process. Her recording of Michael Daugherty’s “Brooklyn Bridge” with the UNT Wind Symphony was released on the GIA label in 2016, and her chamber recordings are available on the Centaur and Albany labels. Luevano joined the University of North Texas faculty in 2011 and served as a member of the clarinet faculty at the Interlochen Arts Camp from 2003 to 2012. She was Pedagogy Chairperson for the International Clarinet Association from 2012-14 and has given acclaimed solo and chamber performances, adjudicated, and taught masterclasses on four continents. Former students occupy performing and teaching positions throughout the United States and Canada. With pianist Midori Koga and soprano Lindsay Kesselman, she forms the trio, Haven, “…. A refuge for the creation of new music for soprano, clarinet, and piano.” Originally from Albuquerque, New Mexico, Luevano studied in Paris as the recipient of a Fulbright Grant and Kade Fellowship. She plays and endorses Selmer Paris instruments and is a D’Addario and Company Performing Artist.

Anatolia Ioannides maintains a versatile career as a pianist, teacher and creative arts entrepreneur. Praised for her “unfailingly skilled and sympathetic collaboration” (Scott Cantrell/The Dallas Morning News) and ”warm deep-in-the-keys touch” (Lynn Rene Bayley/The Art Music Lounge), she is a sought-after chamber music partner, collaborative pianist and coach. She has performed throughout the United States and Canada including the Piatigorsky International Seminar for Cellists, the Banff Centre for the Arts, Women in Music International Composers’ Conference, NATS conferences, USC-Visions and Voices and KUSC-Sundays Live with Rick Todd’s USC Wind and Percussion Ensemble. As Artistic Director and Founder of the chamber ensemble Cmc3+, she produced school and community outreach programs in arts education. She has developed and performed cross disciplinary performances, ”Art and Hellenism”, in collaboration with the Consul General of Greece and Loyola Marymount University (2004) and at the University of Southern California’s Fischer Museum of Art in conjunction with US Ambassador Donald Bandler’s photography exhibit, “A Roving Eye on Cyprus” (2008). She was a leading pianist in the world premiere of Andrea Büttner’s multichannel video exhibition “Piano Destructions”, produced at the Walter Phillips Gallery and the Banff Centre in Canada (2014). She was the founder and director, or a workshop “We Play Better Together”, dedicated to providing coaching and performance opportunities in instrumental and vocal chamber music to pre-collegiate performers. She currently serves on the piano faculty of Southeastern Oklahoma State University and teaches solo and collaborative piano at the University of North Texas- Summer String institute. Anatolia Ioannides is the pianist and co-founder of TrioPolis, and serves on the Leadership team of the International Keyboard Collaborative Arts Society (IKCAS) and as the organization’s Membership Coordinator.